Over half the population of this land belongs to the Hausa, an ethnic tribe who have lived in West Africa for over a thousand years. The Hausa people live in southern Niger and very active in farming and trading.

The other tribes that exist here are the Zarma, Kanuria, Tuareg, and Teda people. Most people live in rural areas of the south. The scorched wastelands of the Sahara Desert and the Air mountains stretch over two thirds of Niger. In these areas, temperatures can soar beyond 122 degrees Fahrenheit. Only three percent of the land is fertile and forms a grassy plain that runs along the southern border. 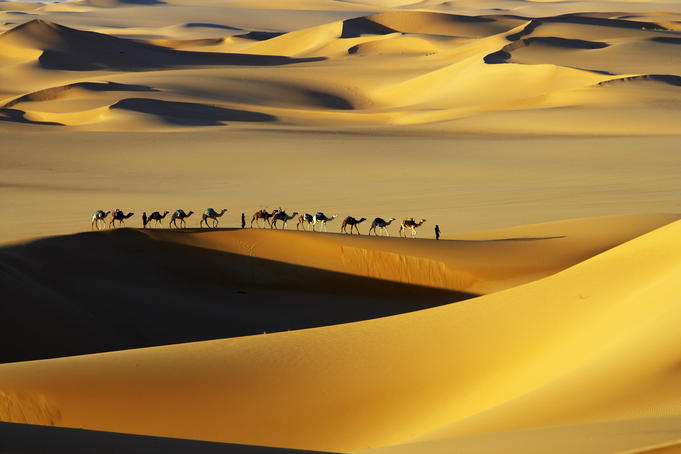 The following attractions are the top ten not to be missed places in Niger. It is an ancient capital of the

with their charming houses that stand in the raw lands of

. The old complex contains beautiful and symbolic decoration that is evident on its facades and the imposing Sultan’s Palace in the center. The residences of several sultans who succeeded one another over time still stand within its bordered grounds. Outside of this tourist destination are the decayed and decadent structures that inspire a unique charm along with its small and proud museum. Getting here is not easy but the effort to see everything inside it is all worth it. To reach this historical site, you need to go to the capital city of Nilarney, rent your own vehicle or make use of the public transportation. It is almost 1000 kilometers by bus transit from the city and about two hour and a half journey. Have enough patience if you are driving along the rough road to arrive at this destination. The center succeeds in presenting a splendid testimony of a century old African culture. Tourists visit this off the beaten path trail to help earn revenue for its proposed programs and restoration. The old quarters of the tribe shows how rich Niger’s cultural history is.

. The palace offers an interesting program and vivid presentation about the life of a forgotten dynasty that once ruled the Republic of Niger. Inside, there is a small impression of the large entrance courtyard that is surrounded by cells of the prisoners and slaves. Across the courtyard stands the hill of the executions where political rulers choose the head of any death row inmates bound to be executed. The details inscribed on the main door is one of the most interesting parts of the palace because it is made with loads of iron metal plates with locks assigned for each accredited locksmith of the region. It was designed this way to secure the palace and its surroundings. The ingenious architecture of the Hausa tribe shines in every corner of this palace from the arched pathways, concrete staircases, walls, windows and roof shingles, their creativity and attention to detail keeps the tourists amused as they explore every room and section of the old palace. Visit the

Check out this Holiday  Top Restaurants To Visit During Special Events

to have a better understanding of Hausa tribe’s rich culture and important role in history.

The small and only regional

stands on a hill that is populated by large turtles. The Museum preserves the testimony of the life of this ancient capital of the Hausa Kingdom complete with clear photos and original documents. Everything about Hausa is all laid out on this museum that is divided into two sections. Do not fail to see the rusty sword that was once used for executions of convicted criminals. It stands next to the room with wooden dummies that take on the role of famous leaders and early colonizers of Niger. Across the museum, visitors can find the

(Grand Market) where locals and tourists hunt for their essentials, food, clothing, handicrafts, leather goods, delicacies and unique souvenir items that will serve as a nice reminder of a good trip in Niger. The market and the museum leaves a good impression of how the people of Niger survive and preserve their history for other cultures to understand and to educate their future generation about the value of protecting their democracy and full independence from France, which occupied Niger from 1921 up to 1960. These two important and most visited spots in Zinder must not be left out when you visit the country.

A visit to this place of inspiration and named UNESCO World heritage Site that was built since the 16th century provides a good glimpse of how devoted the Muslim dominated country is when it comes to expressing their immense love for their faith. From the minaret of this ancient mosque, the view of the city is astounding. The entire mosque can be best enjoyed with an Islamic guide who can explain every interesting part of the mosque with a deeper interpretation and reverence to the Prophet Mohammed (pbuh). Modest clothing is required for both men and women. Shoes must be placed in the lockers located near the entrance. It is advisable to wear socks and to make a little (non-compulsory) donation for the upkeep and maintenance of the mosque and its facilities. With a guide, entrance is allowed into the top portion of its minaret. Visitors must not be claustrophobic as the staircase narrows gradually each time a level is achieved. Look closely at the entire architecture of the simple mosque and how its minaret stands firm despite its sheer size and form. There is so much to see inside the mosque that also serves as the museum of Agadez.

The exotic wildlife of the

Check out this Holiday  Things To Do In Tunis

stands on the border of Niger, Benin, and the Burkina Faso. The best way to explore this vast wealth of wildlife resources is to hire a guide with a 4×4. From the vehicle you can see the wild elephants, antelope, zebras, lions, cheetahs, giraffe, baboons, birds, Nile crocodile, waterbuck or buffalo you name it. Be warned ahead that animals come and go so they hide around the gorge and the bushes, but do not lose patience and they will spring into action. Arm yourself with a good camera to capture the stunning scenery of the trail and the random appearances of the wildlife animals that enjoy their natural and protected habitat.

Camping on this open safari site on the island of the manatees in small huts is advised if you want to spend an overnight stay or a night jungle safari experience (there is a huge difference). The host tribal group in-charge of the

will welcome you with a warm reception of local food served in the middle of the bush. By bedtime, all you can hear are the noises made by the bush crickets and the opportunity to sleep in a hut with a nice view of the stars. The Eco-tour adventure in the park can be pre-arranged with a tour company online or from the tour agents of the hotel where you are billeted.

The soaring heat, chilly breeze, shifting sand dunes, and storms of golden dust and grit make a travel through the

both difficult and dangerous. Covering almost ten countries with its wide expanse, the world’s largest desert area (3,550,000 sq. meters) includes Niger and gives a peek of how the people cope with living in the desert and the various ways they pursue to entice tourist to explore their share of the Sahara region.

and a tour of the more than 3,000 miles of the famous desert provides additional revenue for the inhabitants of the village near the desert.

Prepare for an extreme weather experience with proper clothing as the weather can become too cold in the morning and until evening, but can also turn very humid and dry especially at noon. Porters and experienced guides can guide you to the most visited part of the desert and security personnel can be arranged for your safety as you explore this attraction. Food and drinks or dining places are available in their local market place. There are guest houses available if you plan to spend a whole day of adventure and find it hard to go back to the city because of its remote location.

is like a living museum where the pieces you need to observe are its people and their enterprising way of life. It is an open-air market in the city center that is nothing short of amazing. The colors, the smells and the sounds they make you immerse in a parallel world. It is a piece of civilization that is the best attraction for any visitor that is curious about their culture. You can find everything around here from clothing, food, handcrafted gifts (beaded jewelries), hand woven blankets and wraps, fruits, cotton (Niger’s major crop), millet, sorghum, corn, cassava, sugarcane, peanuts, fresh meat, seafood, electronic gadgets, school supplies, etc.

Check out this Holiday  Things To Do In Gramado

One of the typical scenes where you can best appreciate a piece of African culture is seeing a group of enterprising women balancing a stack of salt cakes in their head as they walk and sell them, this is a common way of carrying goods and wares in many African countries. Be aware of what you are stepping on as some of the sellers just lay out their wares on the ground. Learn to bargain and be aware of your things and safety at all times. The taste of Niger’s local cuisine can also be enjoyed in the grand market of Nilarney.

is one of the most important attractions of the city of

. Inside you can admire the zoo, the square of the nations, the craft village and an archaeological museum with an impressive remains of a dinosaur.

Visit all the theme pavilions and do not forget to meet the curators that work there to maintain the place and all the important artifacts of the museum. It has six exhibit rooms but only three is open to the public. Picture taking is not allowed inside and a guide is assigned to follow you around as you tour the rest of the museum. A visit is a must to view all of its objects, fabrics, rare collections, and national costumes.

Each section provides a comprehensive insight into the history, culture, and the people of the country. The craft section is also a training center. Look for the Aruna master who teaches for decades the art of making batik; you will be charmed by his kindness.

It is a missionary school dedicated to educating the children of

. Before the arrival of the Christian missionaries (Serving In Mission Christian Group) many of the remote villages have no school. The

encourages the children from the rural areas to study and pursue their dreams in an appealing and ideal atmosphere that will fully motivate them to do their best in their academic tasks and responsibilities. This serves as a far cry from the type of school that they have in the nomad group tribes where the use of tent schools is a common scene. This tent schools moves with their owners as they travel in search of water and grazing land for their animals.

The best way to get to know this famous river in Niamey is to rent a boat and absorb all the beauty you will see on its calm waters. The opportunity to see water buffalos, monkeys and bats on trees and huge hippos are far greater here. Migratory birds can also be seen flying around up to the mangrove side of the river. A common sight around here is the traders that sell melons and squash on the banks of the

. The river serves as an important trading route for centuries.